Should I have my silver fillings replaced?

Silver Fillings or Amalgam Fillings have been used in dentistry for over 100 years. They are a mix of different metals, e.g. Silver, Mercury, Cupper, etc. that is mixed together and placed inside a tooth to replace the missing portion of the tooth.

There are Biological and Mechanical concerns, about Silver Fillings that I don’t want to go through here, instead I would like to discuss what most people are concerned about  are:

Having said that most dentists have been shying away from using Silver Amalgam Fillings and have replaced this material with other restorative materials, (Direct chair-side Bondings or White Fillings as most people refer to them; or the other more expensive but a lot more durable option such as Lab processed, indirect  “Ceramic/Porcelain/Composite” inlays & onlays. It has been shown Inlays & Onlays provide better aesthetics and longevity comparing to chairside fillings, which means you can keep your teeth healthier and longer.

It is important to realize Silver fillings are not bonded to tooth structure but they are mechanically retained inside the tooth. Thus after several years in function and being daily pounded during chewing, on the one hand they create “Cracks” within teeth, making them prone to “fracture” and on the other, bacteria leak under the fillings causing recurrent caries and nerve damage.

I would like to provide some clinical photos of teeth with Cracks for better understanding the concerns.

What is important is to identify these cracks with scrutiny and restore them ASAP to eliminate the chance of crack propagation and minimize the chance of root canal treatment or extraction. 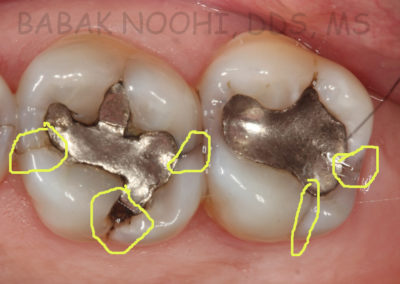 Fracture were identified around the 30+ year old silver fillings. They were removed, Cracks were sealed and the teeth were restored with Bonded Porcelain Onlays. 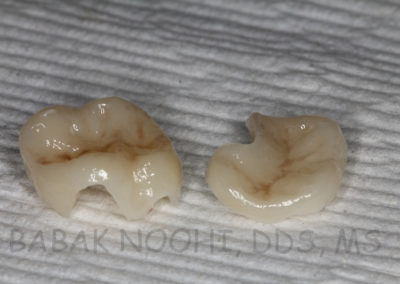 Porcelain Onlays, meticulously made and custom stained to look natural. 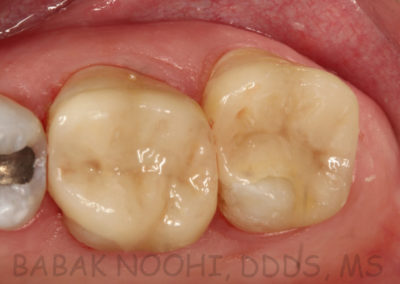 Porcelain Onlays after bonding them on the teeth. 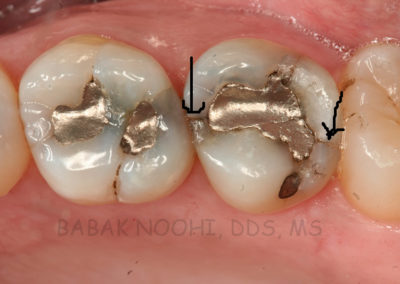 Cracks being developed on the marginal ridge of tooth #15. Seems to be negligible at first look. 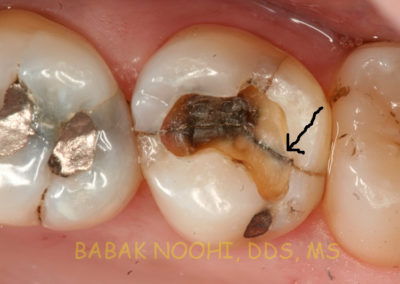 Crack under the Silver Filling extending from the front all the way to the back of the tooth. It was more evident after removing the old silver filling.

Tooth #15 was restored with composite filling and was left to be evaluated for possible root canal treatment. tooth #14 was also proactively restored with a new White filling. 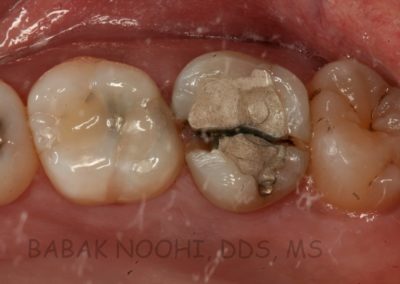 The damage was already done and the Crack was too deep to save the tooth and after 2 months it fractured in half. 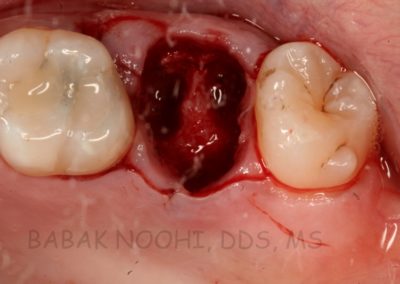 tooth #15 could not be saved due to Vertical Fracture and had to be pulled. This could have been prevented if that old filling was replaced on time. But patient waited until it became painful. 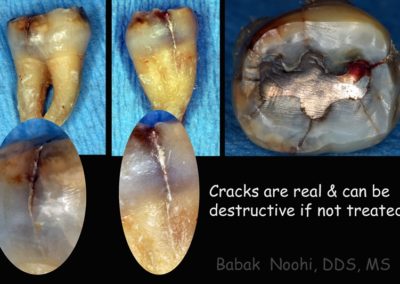 cracked-tooth that needed to be extracted,

If the Cracked tooth is not identified on time, the Crack can propagate vertically down to the root, in which case it must be extracted.